Washtenaw County is now confirmed as an area where Lyme disease can be transmitted. Lyme disease is spread by the bite of an infected blacklegged tick (Ixodes scapularis, also known as deer tick).

All residents and visitors are urged to "fight the bite" against ticks and tick-borne disease. Transmission season for Lyme disease in Michigan typically occurs from May through August, with a peak in June. Frequent tick checks are important during this time of year. Prompt removal of ticks can prevent Lyme disease infection.

Note: Case numbers reflect individuals who met the CDC criteria for Confirmed and Probable case classification for Lyme disease. In 2017, a Suspected classification was added. Lyme transmission was confirmed in Washtenaw County in 2016. *These counts are preliminary and subject to change.

Lyme disease is caused by the bacterium Borrelia burgdorferi and is transmitted to humans through the bite of infected blacklegged ticks. Typical symptoms include fever, headache, fatigue, and a characteristic skin rash called erythema migrans. If left untreated, infection can spread to joints, the heart, and the nervous system. Lyme disease is diagnosed based on symptoms, physical findings (e.g., rash), and the possibility of exposure to infected ticks. In the United States, an estimated 300,000 Lyme disease infections occur each year.

Michigan’s five most common ticks can be seen here. 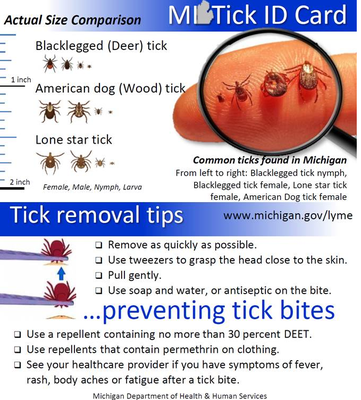 Steps to prevent Lyme disease include using insect repellent, removing ticks promptly, applying pesticides and reducing tick habitat. While it is a good idea to take preventive measures against ticks year-round, be extra vigilant in warmer months (April-September) when ticks are most active.

Tick checks and prompt removal are also important. In most cases, the tick must be attached for 36 to 48 hours or more before the Lyme disease bacterium can be transmitted.

Repel Ticks with DEET or Permethrin

Find & Remove Ticks from Your Body 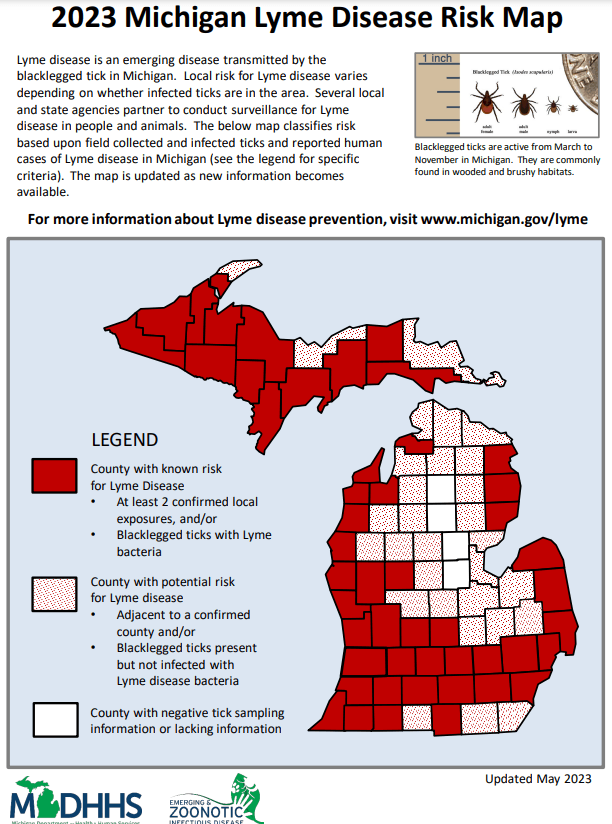 Submit it to the Michigan Department of Health & Human Services for identification or testing.

Or stop by either of our locations for a free kit to mail your tick to the lab:
Ann Arbor: 705 N. Zeeb Rd.
Ypsilanti: 555 Towner St.