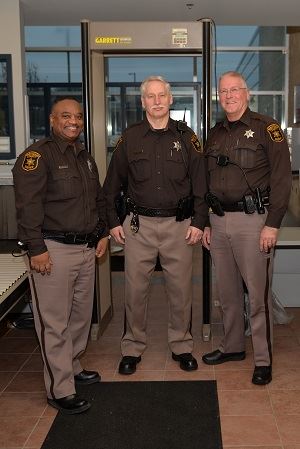 The Court Security Unit is comprised of approximately forty officers and bailiffs charged with providing security for seven Court facilities and nearly twenty Judges and Magistrates. Further, Washtenaw County Sheriff Court Security Officers maintain the integrity of the judicial process by ensuring a safe and secure environment in and around the court complex. 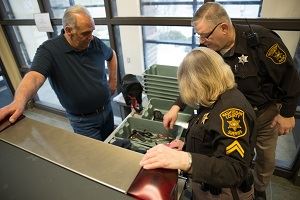 To facilitate this first line of defense, Court Security Officers utilize sophisticated X-ray devices and the latest high-technology magnetometers, similar to those used at airports. Not surprisingly, our officers detect weapons and items that could be used as weapons each day. Most of these weapons are knives, but occasionally we discover other contraband such as swords hidden in canes, machetes strapped to legs, and handguns.

Perimeter patrol of the facility is another important function of our Courts Security Division. Court Security Officers are linked by radio to the Sheriff's Central Dispatch Center. Each Court Security Office has video surveillance cameras, which surround the facilities and monitor all perimeter activity. Officers monitoring surveillance cameras can direct officers to any problems or signs of trouble.

When visiting the Courts it is important to remember that for your safety and to respect the rights of others, several items are banned from entering into any Court Facility in Washtenaw County. Some of these items include:

It is suggested that these items are left in your vehicle while you visit our Courts. 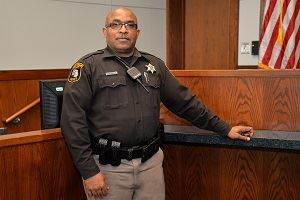 Here you can find information about Washtenaw County Circuit Court, including contact information:

Here you can find information about Washtenaw County District Courts, including contact information: